The National Algerian Motorway Agency launched the “Bouira Tunnel” construction as part of a high-priority section for the East- West Algerian motorway.

The topological and geological environment is very difficult : it fits in stiff slopes of alterable marls with gully erosion and prone to almost generalized landslides.

The tunnel, 1200 meters long, is a wide opening bi-tube (17m), with 3 circulation lanes in each tube. It fits into schistose marl with an important cover of scree and alterations.

Terrasol was entrusted by the group of construction companies COSIDER-STFA with the study of various aspects of the project:

The tunnel excavation works started early 2001, and drilling work in 2004.

The tunnel is the first of an important series along this motorway which will, in its final configuration, link the Tunisian and Moroccan borders. 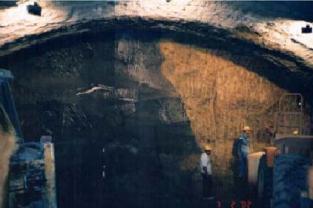 East-West Algeria highway is one of the [...]