As part of the extension of line 11 of the Paris Metro to Rosny-Bois-Perrier, new secondary accesses have to be provided at Mairie des Lilas station, opened in 1937.

The works consist in creating lined shafts from groundlevel, from which galleries will be excavated to intersect the existing structures (ticket hall, connecting passages, underground station).

The study had many challenges and objectives, set out by Paris transport authority RATP: define the phasing of the works, check the temporary support of the structures, assess the effects of the construction of the new accesses on the existing underground structures (Mairie des Lilas station and the line 11 tunnel) as well as on the surface buildings and roads, and lastly define a monitoring system.

Given the geometry of the structures, a three-dimensional numerical approach appeared to be essential in order to investigate correctly the complexity of the soil-structure interactions between the structures to be built and the existing structures, and consequently to be able to deal with the various issues mentioned above.

Two complex 3D numerical models were built, one for each access. They were used for detailed simulation of the works phasing and to design, during the RFP phase, the monitoring system that will be installed for application of the interactive design method during works execution. 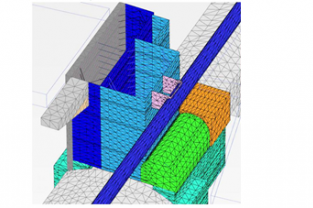 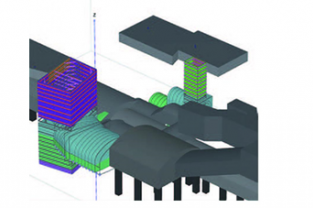