The breakwater of New Port of Tangiers is made of reinforced concrete caissons laid on a seabed fill. The foundation soil is made of silty to gravelly sand over a thickness of thirty meters above the substratum.

These temporal calculations were performed with the Plaxis software. The behaviour laws and mechanical properties of these soils were adjusted to the deformation level under seismic solicitations. The geotechnical, dynamic and numerical assumptions required many setting calculations to preserve the quality of the signal during its propagation through the model.

The temporal acceleration signals located at substratum level were built up following a seismotectonic study which allowed to determine the earthquakes that would be the most damageable for the structure. They were generated from analytical processing by deconvolution of comparable real signals. The study highlighted the effects of far and nearby earthquakes, and more particularly the major influence of the frequential content of the signals on the structure’s behaviour.

Indeed, although far earthquakes generate a smaller acceleration on the site than nearby earthquakes, their low frequency content is close to the global system’s resonance frequency (~ 1 Hz). Therefore, they are more unfavourable in terms of the breakwater stability. The maximum irreversible displacements are 4 cm after the far earthquake, and 12 cm upon the arrival of shear waves. On the other hand, the displacements during a nearby earthquake have low amplitudes and the model illustrates an elastic behaviour.

The dynamic study of the structure requested by the contractor allowed to evaluate the deformations of the caissons foundation under seismic solicitations, as well as the irreversible post-seismic deformations. 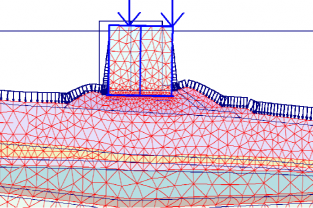