From the initiation of the studies for the second tube project of the Toulon underground crossing, the passage under the Esplanade and Scheherazade buildings in the Marchand sector, in the central part of the tunnel, was identified as being particularly difficult.

Indeed, these two 8-floor buildings had already undergone the digging of the first tube, and soil testing showed the presence of soil with particularly poor quality (soft clay pockets issued from dissolved gypsum).

A very rigid support with face reinforcement by jet grouting columns had been considered, using compensation grouting as an option in case of excessive deformations at groundlevel.

From the beginning of the excavation starting from the intermediate attack of the Marchand shaft, the Esplanade building responded significantly with cracks in the finishings of the buildings, in spite of a still relatively low level of surface deformation. Excavation was stopped due to the anticipation of deformations very close to the limit of the acceptable thresholds after passage of the tunnel. After considering the possibility of reinforcing the building’s structure, it was finally decided to use compensation grouting to stabilize the building.

This method consists in injecting small quantities of grout to lift the building and compensate for settlements generated by tunnel excavation. These injections were performed from 3 layers of 20 sub-horizontal drillings equipped with tubes-à-manchette, making up 5300 injection points. A large-size measurement system, made of topographic measurements from automated theodolites, electro-level chains, borehole extensometers and tiltmeters, allowed for continuous check of absolute and differential settlements, with a sub-millimeter accuracy.

A first phase before resuming excavation consisted in pre-lifting the building by 12 to 15 mm, in order to “catch up” the initial settlements already acquired. This phase also allowed to calibrate the system and validate the volumes of grout to inject by manchette.

Excavation could then resume, by activating the compensation device. With daily injections of about 2000 to 3000 liters, settlements were fully controlled, with an accuracy of about 1 mm.

A “first” in France, allowing to consider using the method in other delicate projects. 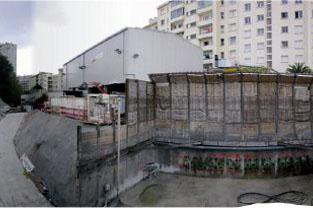