The antimony mine in Ouche, near Massiac (south-central France), has been operated quite irregularly since the early 19th century, before stopping its activity in 1967.

It has become an abandoned polluted site with failing management, with ore processing residue resulting in a potential source of arsenic and antimony pollution.

Embankment instability is also a risk on the site.

Facing this issue, ADEME called upon TERRASOL to perform the project management (design and works) guaranteeing long-term stabilization of arsenic residue storage slopes in the washing area. The goal was to eliminate risks for the environment and ensure public safety, particularly due to erosion and spreading of polluted deposits by lixiviation.

Analyses of upstream water flow conditions, as well as the risk of regressive erosion of the embankments by the Bussac river, have allowed to define the required earthworks and protection measures against erosion.

The works were engaged on site in 2010. Temporary hydraulic developments prevented pollution flows, and were associated with strict monitoring of the quality of river waters along the site, thus enabling to control the impact of the works on the environment. 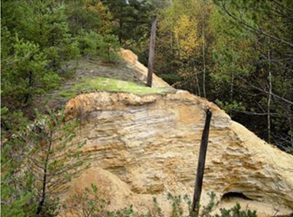