The works for the extension of metro line B at Oullins station started in july 2009. They were due to be finished by the end of 2013. The project consists in the excavation of a single tube tunnel 1.7 km long, requiring the underground crossing of the Rhône river. The single tube will enable twy-way traffic flow.

This tunnel is bored by a group of contractors lead by Chantiers Modernes (Vinci group). The excavation itself started in September 2010 using a TBM with 9.5 m of diameter, allowing the creation of a tunnel with 8.35 m interior diameter. The tunnel is bore 17 m belowr the Rhône river bed (at the deepest point), i.e. 35 m below Rhône river water level, in soils made of alluvium and molasses. On march 2nd 2011, the TBM reached the Oullins-station, after a 5-month excavation. Beyond the line terminus, the TBM has also bored a 300 m tunnel in granite for station facilities.

Terrasol got involved in different phases of the project: 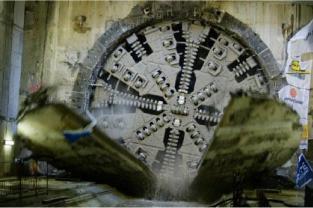