The South extension of Line 14 will connect the capital with Orly airport. Built entirely underground, this section is composed of tunnels 14 km long, 6 stations and 12 shafts, including one of exceptional size, at 66 m depth. The tight deadlines (the commissioning for this section is scheduled for the Paris Olympics 2024) and the works’ scale required to divide the project into 4 sections with 4 different contractors consortia, as well as to anticipate 3 tunnel boring machines. Two of them have already been christened “Claire” (for Claire Mérouze, the first woman to fly a Rafale at the age of 25) and “Koumba” (a reference to Koumba Larroque, a wrestling champion).

One of the main technical complexities of this project is raised by the excavation of the tunnel for section 2 under the former coarse limestone quarries (CG) and the gypsum masses and marls (MFL).

To secure the works in such an urban area, it was decided to inject grout in all the quarries and decompressions of the ground above the tunnel over a width ranging from 20 to 30 m (defined during the design phase). These injection works, especially given the dense urban environment, constitute a major challenge, which requires to minimise any nuisances for residents despite the parallel activity of several sites under construction.

The TERRASOL team is currently working within the Project Management Group SETEC / SYSTRA on both the visa mission (control of the detailed design) and on the geotechnical works follow-up (after having ensured the study phases). At this stage, the geotechnical follow-up is mainly focused on the quarries backfilling works, on the diaphragm walls execution and on the earthworks for the stations and ancillary structures.
The presence of underground quarries in the Paris subsoil imposes difficult geotechnical conditions: the presence of voids/decompressions in the soils and of poorly compacted filling material in the quarries generate instability mechanisms as from the grouting drilling phase:

To the extent that, as planned, these quarries and decompressions are reinforced through grouting works, the progress of the tunnel boring machine should not generate instabilities, but only additional settlements, which have to be taken into account during the vulnerability analysis performed for the buildings concerned.

There are many additional constraints: limitation of the rights-of-way, presence of sensitive neighbouring structures, identification of additional operated areas or of unclassified ongoing sinkhole mechanisms (not listed on the IGC maps), etc. 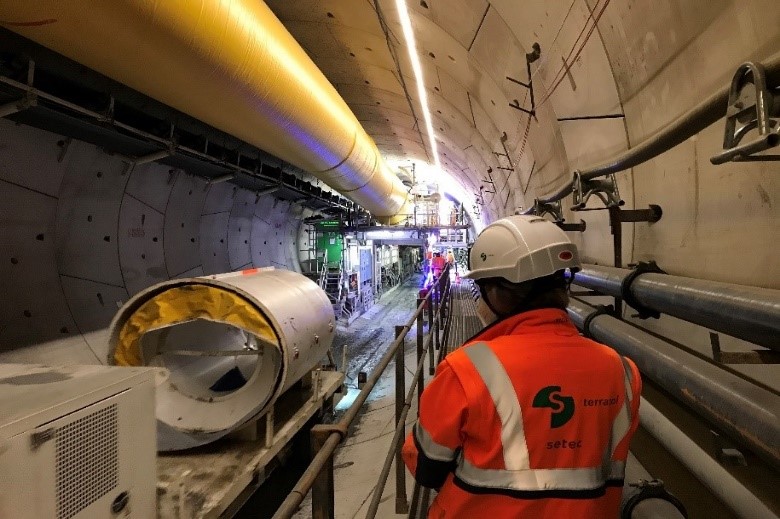