As part of the extension of the RER E (Eole) line to the west of Paris, the project management design studies for which are being carried out by the SETEC – EGIS – Jean-Marie DUTHILLEUL consortium, a new station has to be built in the “La Défense” district, under the CNIT building. It will comprise a main part built under existing structures, extended by two underground connecting tunnels. Anchored at a greater depth than the existing structures in the sector, this station is located in a particular geological context raising demanding technical challenges, characterized by stratified layers at vault level and a limestone slab remnant (coarse limestone formation) overlying loose sands with a confined groundwater level at foundation level. Moreover, as the CNIT building is sensitive to deformation and vibration, the construction methods to be considered must limit the displacements and nuisances generated. From the basic design phase, in the framework of an overall risk management process, substantial soil survey works have therefore been undertaken from the building’s deepest basement level, with the aim of characterizing the geological formations concerned by the project and assessing the feasibility and the impact of the construction methods.

TERRASOL, which is conducting for this Eole project the geotechnical analyses of the structures in the “La Défense” sector for SETEC, defined the soil testing program and followed-up its implementation. The challenge consisted in defining methods for geomechanical and hydrogeological characterization of all the formations impacted by the project: from loose soils (Ypresian sandy clay formations, located below the structure foundation levels) to soft rocks (very heterogeneous stratified marls, screes and coarse limestone formations that will be cut into by the excavations). The proposed methods had to take account of the highly-restricted context (underground car park with low height clearance).

The approach adopted consisted in full-scale tests supplemented by more conventional tests. A dedicated exploratory shaft with a diameter of 4 m was excavated by conventional means to a depth of 25 m. It enabled the rocks to be viewed at full scale and plate loading tests (horizontal and vertical loadings) and vibration tests to be performed at several levels. The program is supplemented by conventional geotechnical surveys, including core drilling (used for a number of logging measurements), in situ geotechnical tests (SPT, pressuremeter, dilatometer and cross-hole tests) and laboratory tests. Full-scale permeability tests were performed in the two impacted aquifers (selective pumping tests).

The works, started in June 2013, required substantial preliminary excavations to obtain the height clearance needed for machinery and equipment. They were completed by the beginning of 2014. All the data obtained were used to establish an exhaustive geological, geotechnical and hydrogeological analysis adapted to the context and to the complexity of the project, to define the calculation parameters for the detailed design phase, and to propose appropriate construction methods for the construction phase. 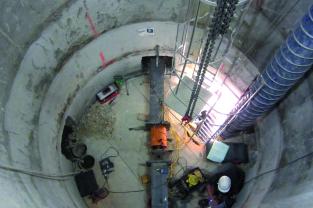